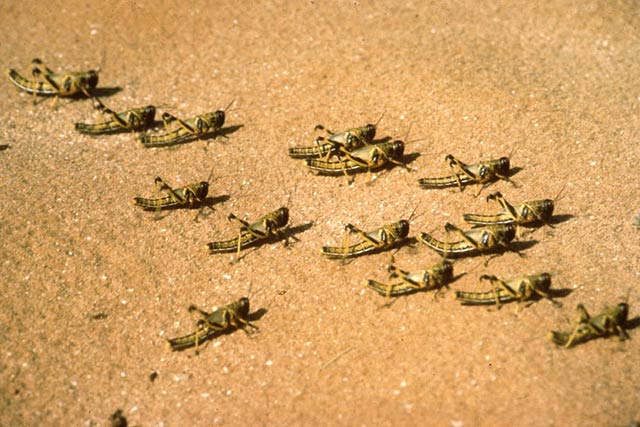 Team Astral has taken a step back in the fight against the desert locusts in East Africa. This is with good reason of course. After reduced locust activity in the region, we decided to implement some of the learnings from our initial testing phase.

After conducting several test flights against the desert locusts, we quickly realized that we would have to improve our efficiency in terms of pesticide coverage. To do this, we could either improve flight times or improve the spray technology in order to increase our efficiency enough to feasibly support ground and aircraft response teams. Furthermore, we took the advice of several stakeholders conducting spray operations including the FAO to make the switch to Ultra Low Volume spraying known as ULV.

This meant retrofitting the drone to carry an entirely new spray platform that would potentially improve our spray efficiency and improve the impact of drones in the fight. With ULV, we would possibly integrate drone desert locust control into existing response actions cost effectively and at a larger scale, as the technology would ensure we covered a larger area with the same quantity of pesticide.

The DJI Agras T16 drone is a powerful and efficient sprayer on its own. But for desert locust control and other similar applications — such as spraying the Qualea Qualea birds — we needed to boost the spray effectiveness to enable better supplementing of existing control technologies.

Our original spray drone is considered as medium to low volume spraying that uses emulsifiable concentrate known as EC. The chemical is mixed with water. From our previous experience with transporting spray chemicals in remote regions, we learnt that it is difficult to find water to mix and in other cases, there were no roads leading to the locust roosting sites. We were literally forced to carry large quantities of water manually over long distances, which is extremely difficult.

Using EC formulation, we covered a single hectare in approximately 10–12 minutes. The time taken to complete 1 hectare needed to be improved. After consulting, we learnt about ULV technology and the improvement in efficiency it would bring. The technology fitted onto the drone utilizes a brushless motor atomizer that allows for smaller droplets. Stakeholders that are already performing spray operations informed us that they were achieving outputs of 1 litre per hectare in a minute! This would drastically improve our efficiency.

We also learnt that using ULV formulation would mean that we would not have to carry water and would therefore improve the logistics of the operation. Since the formulation is “sticky” it is considered to make the control liquid more effective.

Using the figures from the ULV manufacturer, we aimed for up to seven times improvement. This improvement would mean drastically reducing the amount of spray chemical applied, and with the tiny droplets (forming more of a mist) increase chemical penetration on the destructive pests and therefore our effectiveness in the field. The main advantage we expect is the increase in hectares covered over a single flight compared to the EC method we initially used. Furthermore, the biopesticide we will use is more effective in ULV formulation.

We noticed there wasn’t a drone equipped with ULV capabilities on the market; we quickly realized that purchasing one was not really an option that was open to us as much as we were open to it. Our next best option was to do it ourselves. We thought: “we have the drone, we know exactly where to get ULV sprayers and finally, we’re smart!”

So, it was decided. Astral Aerial Solutions would integrate a ULV system onto their crop spraying drone.

On to the drawing board

The modifications kicked off as any typical project would; that is, importing, sourcing, negotiating and gathering our parts and tools together at the workshop. We procured the ULV system from Micron which was the pioneer of ULV technology. Micron would partly assemble a lightweight ULV nozzle in Europe, while Astral was responsible for the build, integration, and system testing in Nairobi. The build was led by Allan Mwanzia, our trusty head of all things technical at Astral. He was able to source other electrical components from suppliers in Nairobi and also went as far as going to the junkyard, finding an aluminium window channel that was perfect as a boom to hold the ULV nozzles.

The team went through manuals, white papers, videos and lengthy conversations with advisors. It was a steep learning curve over such a short period, but we pulled through because we’re really smart! To start-off, we assembled the potential meters, and connected the system to the drone pipe supply and spray tanks. After this, we connected the assembly with a power source, (i.e. batteries). The biggest concern was that the battery would drain too quickly, especially when running 4 or 5 sprayers, though we later found that the rate of power consumption is low enough to spray for several hours on a single charge.

To be able to power the assembly in flight and use least additional systems, we reduced the chemical pipes from four to one that lead to the sprayers. This effectively divided the usage of the chemical by 4 while increasing the area covered in a spray flight.

Lastly, we inserted a shunt on the supply pipe that leads some of the chemical back to the tank to prevent excessive chemical supply to the ULV spray discs as that can easily increase the size of the spray droplets.

Finally we integrated the spraying system to the Agras T16 drone, while making safety considerations to avoid voiding the warranty on the drone. The sprayers and battery were then balanced to maintain the drone’s centre of gravity (c.o.g) and carried out build quality checks to ensure parts did not move while in flight. The new ULV sprayers were now mounted onto the DJI T16 spray drone successfully!

We decided to make the new system independent of the DJI systems. This means the new system is not integrated into the drone’s electronics. We did this because we still wanted to maintain the spraying technology that was already on the drone since it still has use for our farm spraying.

The project was a success, and it was all thanks to our technical team. Did I mention that we’re smart?

We now have a spraying drone kitted out with a working ULV system.

This, to us, marks the first hurdle that we have overcome. The next step is to test the drone operation in different environmental conditions and assess its performance. It’s exciting to think that we can potentially achieve a 7x increase in spraying efficiency, while reducing the spray time and increasing the drones versatility in terms of the density of chemicals that it can spray. We’re also curious to see how the drone fits into the desert locust control support efforts and how much more we can supplement ground control by reducing the area needed to be covered by ground teams, or for aircraft response by increasing the area covered per spray flight in places not accessible to aircrafts.

More importantly, how much more impact can we achieve with other pests, and/or different spray chemicals that we can now implement with the spraying drone? We don’t know yet. What we are sure of is that with these improvements, we are ready to explore the feasibility of drone implementation at scale in desert locust response as well as in other applications.

We have an exciting sprint ahead of us and a lot of exploration and learning to do.

These are exciting times!