Aerial spraying with drones in disaster responses has come a long way. From an industry sector perspective, the greatest challenge with drone utilization is transforming our perceptions about the technology; that it’s very high-tech with sophisticated uses. In the quest to fully leverage drones, we as drone operators are constantly battling negative perceptions, irresponsible or rogue drone operators, underestimation of the technology, reducing drones to recreational toys, and more interestingly, exaggerated expectations for drone capabilities. I remember an inquiry I personally received recently for a drone that can carry out security surveillance from Nairobi to Mogadishu! Not a bad thought at all, as all ideas are welcome, but we would do well to pace our imagination to match industry progress.

Progress is indeed a slow process. As industry stakeholders, we are collectively contributing to this process: from an aviation regulation standpoint, to drone awareness, where we’re all working to build positive and progressive ideologies about drones, and finally from an implementation perspective, where we get a chance to experiment with drones for different contexts and uses. Learning through experimentation then paves the way to identifying optimal operational workflows to achieve different desired outcomes.

This has been Astral Aerial’s journey since we decided to pursue drones as a solution to control desert locusts. For most people it seems crazy to imagine drones in that way. But for us, it has been an unexpectedly wild and meaningful journey to literally carry our massive spraying machines to the most remote regions in Kenya for desert locust spraying, then after that, take it back to our workshop to modify its sprayers by integrating Ultra Low Volume (ULV) spray nozzles so as to spray smaller droplets for higher liquid penetration. We now finally are returning it back to the field to test our modifications in a real-world environment: at Muguga farm in Kiambu county, Kenya.

Successful ULV technology integration on drone sprayers would greatly improve our spraying effectiveness. From the very start, our goal has been to implement drones as a supplementary technology for disaster response. Aircraft spraying and manual ground control spraying are the methods that are currently used in desert locust control despite the significant existing challenge to accessing complex terrain locations. With drones, we’re able to fill these coverage gaps, but in order to do that, it is crucial to ensure that drone sprayers can match the effectiveness of these existing practices. How we did that was by matching the existing spraying technology used for both aircraft and manual spraying, hence the ULV technology modification. Successful ULV performance on our drones will not only elevate our effectiveness but also ensure consistency of results regardless of the spraying control method implemented.

Desert locust roosting sites are more often than not located in inaccessible areas that are characterized by poor terrain, undeveloped infrastructure, or are sometimes clustered over vast areas. Drones are a handy tool for tracking and identifying these roosting sites as they can be deployed in these locations to carry out aerial surveillance. With this reconnaissance, accurate and effective flight planning for the aerial spraying exercise is made possible. Hence the need to determine the optimum drone surveillance parameters that will ensure rapid drone deployment and effective workflows.

The same applies to aerial spraying of desert locusts. The roosting period in between desert locust movements is critical in any desert locust control mission. Locusts travel hundreds of kilometers in a day’s flight. In addition to that, they follow the wind direction, which is usually unpredictable. Locating a roosting locust swarm or a breeding site with hoppers is a ‘golden opportunity’ for desert locust trackers to carry out spray control. This is why it is critical to fully understand how to optimally deploy drones in spraying to achieve the highest control rate possible in a single flight. It is, in essence, a fleeting opportunity that will not come back and therefore, there is absolutely no room for error. Thus, there is the need to identify optimal desert locust spraying parameters, with ULV technology integrated. These parameters include spray heights, flight path, battery life and performance measured according to spray rate, swath width, spray time and drone battery life.

The test site was a one hectare land parcel. For the experiment we used both live and dead desert locusts stored in cages and tins all spread out across the field in clusters at varying intervals. The locusts were arranged for both the testing groups as well as control groups. For the surveillance drone platform, we used the DJI Phantom 4 drone, with up to 1080 resolution pictures and 4K video quality capability. The spraying platform used was the DJI Agras T16 drone with ULV integrated. The ULV system consists of a spraying boom, Y-piping joints for chemical supply and 10,000 MAH LiPo battery.

The DJI Phantom 4 pro drone was set on the same flight path and flown at five different heights of 30m, 35m, 40m, 45m, 50m, and 75 m above the mapping targets to collect images. The targets were 1,000 preserved (dead) locusts that were spread in two 0.5 acre fields with grassland and 80% bare ground respectively. The images were then processed to produce varying resolution ortho-mosaic maps. The maps will then be analyzed for clarity and detail as well as optimal flight path in a field setting. From the field experience, it was safer and easier to fly at 40m above the ground, as there was less likelihood of encountering obstacles and higher flight speed could be achieved. This, however, is a general observation that will require verification upon map analysis. 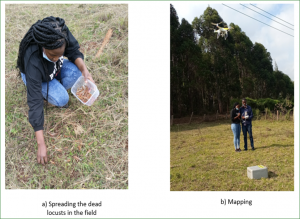 For spraying, we had live locusts put in cages and sprayed with the biopesticide metarhizium (also known as green-muscle) and fenitrothion for different locust groups respectively.

Watching this massive quadcopter fitted with the ULV spraying boom take-off successfully for every single flight was amazing. It felt like one of those moments in life when you know without a doubt, that you’re a part of something great. Taking that drone from its original manufactured state with the emulsifiable concentrate spraying system and fitting in the ultra-low volume system, while upholding complementary systems such as power supply, spray liquid supply, and finally, all its control systems were quite the challenge, but our team did it! Working with an already manufactured industrial spraying machine like the Agras is one thing, but upgrading its capabilities to match what we want it to do is a completely different ball game. I honestly can’t complain about being part of the team that has left such an indelible mark on the global UAV industry.

After spraying, the sprayed locusts were then taken back to CABI’s lab for observation of mortality and fungus growth. 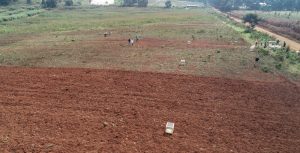 For the desert locust mapping, it was found that flying at 75m achieved the best results, with a resolution of 2.05 cm/pixel. The resolution was of course higher with lower flight heights, but with obstacle and flight speeds consideration, it was found that at 75m, the images were clear enough to identify swarm location, approximate swarm size, and also identify the locust life cycle stage.

On spraying, we were able to achieve a coverage rate of 1 hectare in five minutes with ULV as opposed to emulsifiable concentrate (EC) spraying (considered a medium to low volume sprayer) with a coverage rate of 1 ha in 10 minutes. Additionally, the area was quite small, and therefore, it took more time to shift the drone from one flight line to the next, costing us more time.Therefore, a higher coverage rate could be achieved on a larger area. We also observed a considerable increase in battery time and finally, were able to achieve a spray rate of 900ml per minute (300 ml per minute per nozzle). For spraying effectiveness, we achieved higher mortality when the drone was flying at lower heights.

To further verify our findings, and make meaningful comparisons, all the experiments were replicated at the same farm under similar weather conditions. We pinned hundreds of papers on the ground at 1m intervals in three different rows with 30 m spacing. Water soluble ink was sprayed on the papers using the Agras T16 drone, both with ULV fitted and without ULV, at five different heights. The sprayed papers were unpinned from the ground after every spray run and the fresh ones pinned for another set. This was done three times for all five heights.

Sprayed papers will be analysed for swath width, droplet densities and coverage area to determine the optimum spraying height and effectiveness with and without the ULV spraying system. 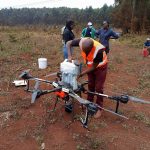 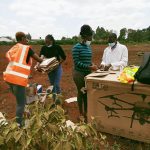 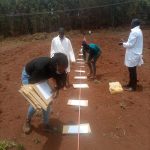 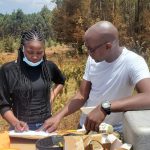 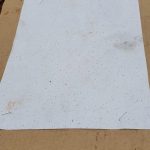 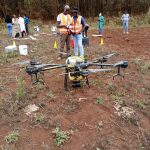 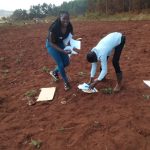 The Muguga farm experiment was an initial step in the verification of the effectiveness of ULV integrated drones and aerial monitoring drones to track and spray desert locusts. It solidifies part of the operational aspects of drones in desert locust management efforts. So far, the results indicate improvements in surveillance and spraying workflow procedures, as well as in chemical spray rate per spray nozzle and, finally, higher area coverage rate, which will lead to larger area coverage within the same time during actual operations. The experiments also brought to fore the significant effect of wind speed and direction on the effectiveness of the drone. We found that it was crucial for the pilot to stay aware of wind patterns during spraying so as to take advantage of the extra coverage from the blown spray droplets.

This is a good start to improvements in drone implementation for integration as a supplementary technology in desert locust disaster response efforts. More improvements like this spell a future where drones will be automatically deployed to collect imagery on desert locust swarm locations and sizes. This reconnaissance will then enable strategic planning and positioning of desert locust control assets like aircrafts, ground sprayers and drone sprayers to tackle the swarms at different tactical locations. This will ensure more swarms are controlled effectively within one roosting period through well synchronized collective control efforts.

The next step is critical, as we look at the desert locust spraying results over different heights. We expect to achieve higher spray coverage for higher heights as there is a longer distance covered by the trajectory of the droplet. We can also expect higher droplets penetration at lower heights owing to the close proximity of the target to the sprayers. This is a general assumption. With the results, we will be able to identify the most effective or optimum spray height above the spraying target to control desert locusts. While hopeful about the experiment outcomes, it would be interesting to see how wind conditions affect spraying performance. The winds were considerably strong which consequently blew the chemical further. Though it improves the spread of the pesticide, would it have any effect on the penetration? Our experiment results will shed light on this.

Progress is indeed a process. This part of the process lays the foundation to building efficient, optimized, and evidence-based drone operations in critical applications such as desert locust control as well as the management of similar pests with drones. Considering a future where we can potentially eradicate the damage and loss caused by such disasters, makes the process well worth it. If you’ve read this far, understand that you have a front-row seat to the potential that innovation has to solve the myriad of challenges we face globally, like climate change and food insecurity, both associated with desert locust invasion. You only need to take the next step and get involved by supporting and growing such endeavors that attempt to solve these challenges, so as to make the world a little better than we found it. Be a part of the process.

For any questions, comments, and suggestions, please get in touch through operations@astral-aerial.com or ftlenquiries@imcworldwide.com